My professional background reflects a strong trajectory for a career in interdisciplinary research as well as a commitment for diversity and inclusion within neuroscience. My long-term research goal is to develop measurable biomarkers and biologically plausible neural circuit models of abnormal social decision-making behavior in neurodevelopmental disorders to guide future intervention strategies. To achieve my research goals, I aspire to be an independent investigator at a research institution.

Throughout the animal kingdom, social species establish social hierarchies and use social rank to guide the appropriate expression of dominance behaviors that are critical for survival. Neurobiological investigations have identified a key role for medial prefrontal cortex to lateral hypothalamus projection circuits in representing social ranks and mediating the expression of social dominance behaviors. The orbitofrontal cortex (OFC) has also been shown to process social information. OFC processes are thought to be mediated by vast neuromodulatory innervation from subcortical structures known to regulate sociability, such as the dorsal raphe nucleus (DRN). Serotonergic (5-HT) DRN neurons have been identified as a key neural substrate for mediating social interaction behaviors and they provide the majority of serotonergic innervation to the OFC. However, it is unclear whether DRN5-HT-OFC circuits can process social ranking information to influence behaviors dictated by social ranks.

My postdoctoral research aims to characterize the largely unexplored role of OFC in representing social ranks as well as reveal for the first time whether OFC interactions with serotonergic systems regulate the expression of social dominance behaviors during social competition. The central hypothesis of my project is that OFC encodes social ranking information during social competition and that serotonergic input from DRN modulates the expression of dominance behaviors. To test this, my research will use machine learning tools to automatically track and classify social competition behaviors in multiple animals. My research will then characterize behavioral states that are encoded by OFC neurons by measuring population dynamics aligned to classified social competition behaviors. Finally, experiments in this project will activate DRN5-HT-OFC projection terminals and establish how manipulating serotonergic circuit activity changes the expression of social dominance behaviors during social competition. Project findings will establish a novel, circuit-specific mechanism for how the brain processes social ranking information to adjust behavior accordingly during social competition. Developing a better understanding of the neuronal mechanisms governing the appropriate expression of social behaviors will provide great value to clinicians and translational researchers wanting to treat social behavior control deficits observed in psychiatric disease. Execution of these projects will be made possible by the Tye lab’s expertise in social behaviors and neural circuit dissection as well by expanding upon my prior training in calcium imaging, optogenetics, and computational analysis.

Daily life involves making adaptive decisions to achieve desired goals. Alcohol dependence is associated with decision-making dysfunctions that are thought to drive a relapsing cycle of intoxication, bingeing, withdrawal and craving that promotes excessive alcohol use despite negative consequences. The orbitofrontal cortex (OFC) has been widely implicated in value-based, goal-directed decision-making and has been shown to be dysfunctional in alcohol-dependence. The first part of my thesis, funded by the NSF-GRFP, aimed to investigate whether alcohol dependence-induced changes in OFC function altered OFC representation of action and outcome-related neural activity. To do so, we used a well-validated model of alcohol dependence, chronic intermittent ethanol (CIE), and performed in vivo extracellular recordings as mice performed an instrumental lever-pressing task in which they self-initiated lever-press responses and were required to hold down the lever past a minimum duration to earn a food reward. We found that 1) alcohol dependence disrupted goal-directed action control of task performance, 2) increased OFC activity associated with lever-pressing actions, and 3) decreased OFC activity during outcome-related epochs. Our results suggested that chronic alcohol exposure induced long-lasting disruptions to OFC function such that activity associated with actions was enhanced, but OFC activity contributions to outcome-related information was diminished. Overall our findings identified some of the complexity in how OFC’s contributions to decision-making computations are altered following alcohol exposure and further supported the OFC as a target brain region for the intervention of alcohol use disorder (AUD).

While our previous findings implicated OFC in representing actions during decision-making, it remained unknown how whether OFC populations support action-related computations, including computations important for inferring past action information. Given that OFC has been hypothesized as key for inference-based Pavlovian behavior, the second part of my thesis aimed to investigate whether OFC populations contributed to action-related inferences. To do so, we took advantage of our self-paced lever-press hold down task to probe how current and inferred prior lever press durations guide subsequent lever press performance. We found that 1) calcium activity of genetically identified OFC subpopulations differentially instantiated current and prior action information during ongoing decision-making, 2) transient optogenetic disruptions to OFC activity left mice unable to use recently executed durations to guide ongoing action performance, and that 3) a chronic functional loss of OFC circuit activity resulted in a compensatory mechanisms of repetitive action control, increasing behavioral reliance on the just completed action. Thus our results identified a novel role for OFC in the continuous integration of inferred action information in guiding adaptive behavior.

My thesis work thus far suggests OFC populations differentially contribute to actions during decision-making, and that such computations are disrupted in alcohol dependence. The final part of my thesis examined which OFC projections are important for behavioral control. OFC projects to secondary motor cortex (M2) and this circuit has been implicated in compulsive disorders and repetitive behaviors, including AUD. Thus far, we have found chronic alcohol exposure disrupts premotor circuits by altering cortico-cortical transfer of information about actions and their outcomes, thus providing mechanistic support for targeting activity of human premotor regions as a potential treatment in AUD. 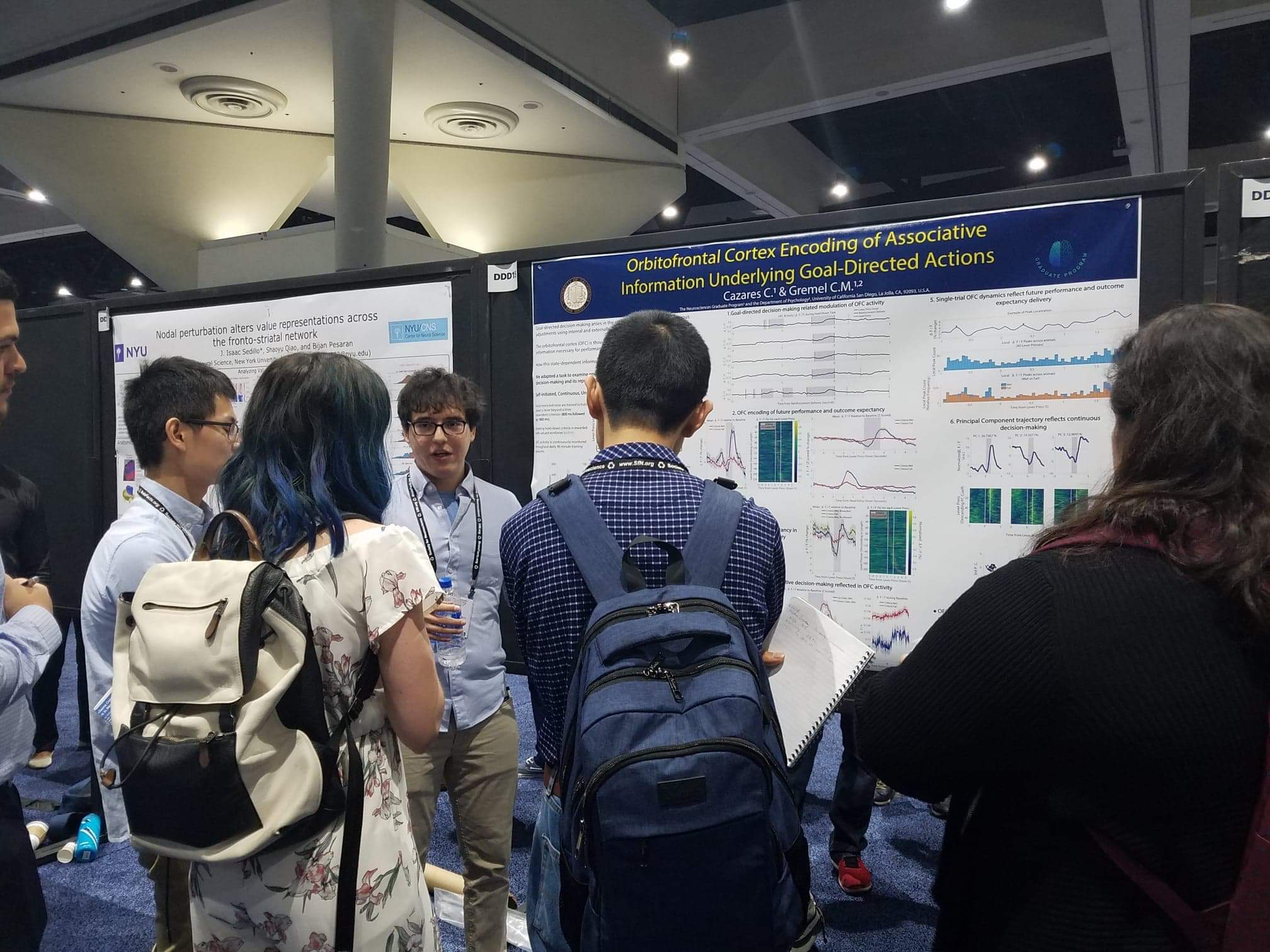 In the Lucki Lab at the University of Pennsylvania, I used animal models of depression and anxiety to evaluate the efficacy of novel neurotransmitter and peptide receptor ligands for clinical therapeutic effects. My main project focused on evaluating the therapeutic potential of a novel, highly selective kappa-opioid receptor (KOR) antagonist (LY23456302) in an animal model of co-morbid depression and anxiety, Unpredictable Chronic Mild Stress. My results showed that chronic, selective blockage of KORs led to reduced depressive-like behavior quicker than typically prescribed antidepressants, supporting the development of novel, selective KOR antagonists for treatment-resistant depression and anxiety disorders. My time in the Litt Lab at UPenn was spent investigating the cause of cognitive deficits often reported by medically refractory epilepsy patients. For my project, we hypothesized that interictal epileptiform spikes, which are routinely seen in intracranial electroencephalography (iEEG) of epilepsy patients, impaired memory processes in an anatomically constrained manner. To investigate this, I analysed iEEG recordings from over sixty epilepsy patients performing a delayed free recall task used to test short-term memory. I built a data analysis pipeline that quantified the effect of each interictal spike on the probability of successful recall using a generalized logistic mixed model. My main finding was that in patients with left lateralized seizure onset zones, spikes outside the seizure onset zone impacted memory encoding, whereas those within the seizure onset zone did not. My results suggested that seizure onset regions are generally dysfunctional at baseline and support the idea that interictal spikes disrupt cognitive processes with respect to the anatomical distribution of the underlying tissue.

During my undergraduate years at UC Berkeley, my projects focused on investigating how corticospinal excitability during decision-making actions is shaped by anticipation and available choices. In our daily life, we are faced with a variety of response choices during decision making (e.g. do I flip a light switch with my right or left hand?). What are the motor inhibitory mechanisms that optimize our responses? In the Ivry lab, I learned how to apply Transcranial Magnetic Stimulation (TMS) over the motor cortex of participants engaged in a delayed choice reaction time (RT) task. Each TMS pulse elicited a motor evoked potential (MEP) measured by electromyography recordings over response choices (i.e. left or right hands). In my first project, I found that corticospinal excitability during response inhibition varied as a function of anticipation, possibly to prevent the occurrence of premature and inappropriate responses during competitive action selection. I also conducted a set of experiments that assessed the role of corticospinal excitability in the context of competing actions between homologous or non-homologous muscles, upper and lower limbs, and body parts rarely involved in action competition (e.g. head). My results showed that levels of corticospinal excitability during response inhibition changed as a function of the anatomy of response choices, suggesting that motor response inhibition is constrained less by the similarity between potential responses (i.e. homology), and perhaps more by a past history of competitive interactions (e.g. we rarely have to choose between right finger vs head movements in our daily decision-making). During the summer of 2013 in the Gazzaley Lab at UC San Francisco, I used a computational approach to analyze attention-related electroencephalographic activity from aged participants of a longitudinal videogame cognitive training study that assessed multitasking performance. My project involved using sLORETA and Matlab to localize the source of midline frontal theta (MFT) activity occurring shortly after distractors appeared on the screen. I found that MFT power increases across training were localized to the medial frontal gyrus, a brain region critical for sustained attention. Moreover, my results showed that MFT power decreases across training occurred in the motor cortex, suggesting that as aged participants became more proficient at multitasking, a vast prefrontal network critical for executive control was recruited to a greater degree than regions involved in the initial motor skill adaptation of multitasking demands.